Alhumdulillah HBAP finally had the opportunity to host her very own "party for only girls!".  All the Pirani boys were sent out for the day day......except for SBAP (3 yrs old) and  ZBAP (1 1/2)....

The guest list as compiled by HBAP consisted of those young ladies and their mothers that HBAP knew personally and enjoyed the company of, the guests themselves were excited about attending a girls only party too, Masha'Allah. Activities prepared for the girls consisted of :

Bracelet Making:
Shinny beads were placed in bowls and trays for the girls to make their own bracelets, the cord provided was old, unused dental floss.

Mehindi:
Cones from Saeed Ghani and lots of tissue was ready for the girls to have their hands decorated. Umm Uzair generously brought books with various mehindi designs and applied it for the girls while her baby Asma rested. Once Baby Asma felt her patience wear thin, other moms took turns to decorate the little girls hands. Alhumdulillah, the mehindi dried fast and the girls washed it off quickly to play.


Grab the Bag:
Bag filled with a treat suspended above a door frame, the girls had to bring it down on their own. After puzzling over it a bit, the girls took turns climbing the door frame and reaching up for it, Masha'Allah, it was down soon and the girls distributed the sweet boxes equally amongst themselves.

Put the Apple in the Tree:
This version of "Pin the Tail on the Donkey" was provided by Umm Uzair. The girls soon organized themselves and played the game, enjoying and watching each other's efforts, as the mothers relaxed and enjoyed each other's company Masha'Allah.. 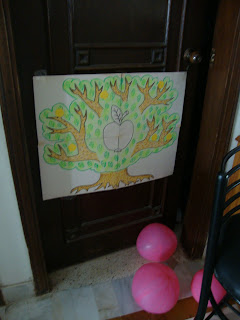 The balloons for the party were blown by little Maria, who also suggested we have a game of balloon bursting, as she put all the effort into blowing them up Masha'Allah how could we refuse? 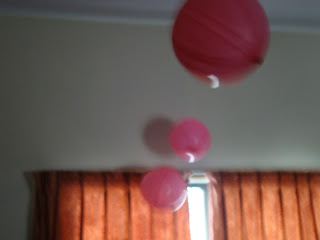 DIY Lunch:
After the success of the Do-It-Yourself meal with the boys, we put it together for the girls, other than the burgers which the girls made themselves Masha'Allah, the menu offered macaroni salad, juice and a chocolate fudge cake. Umm Sofia also brought two tea cakes to compliment the menu. All present found it yummy meal and a fun to do activity. 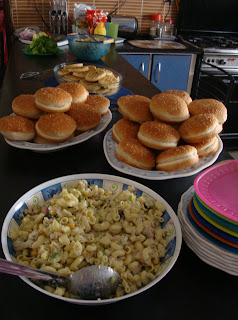 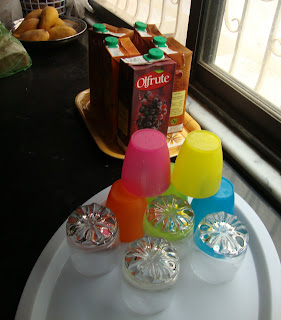 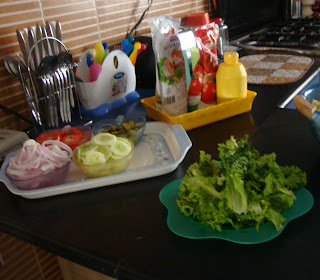 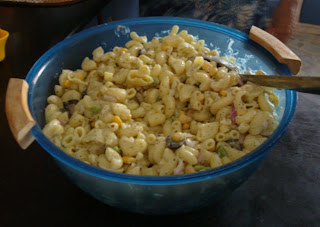 Unfortunately, the hostess had to leave the party early to attend her Quran/Arabic class, but before she left, HBAP distributed gifts to her guests: 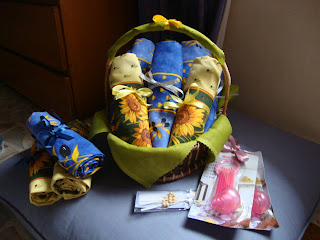 Aprons with little clips to wear hidden in the pocket for the girls and for the babies; sets of pink coloured measuring spoons (a fav. ZBAP rattle) in keeping with or unspoken of kitchen theme. Hafsa and Umm Uzair also brought a gift for the guests; packages consisting of sweets and cake with a doll.
Alhumdulillah, all had fun.
"I liked it. The fun part was having sweets and playing with balloons. I liked the burgers. Umm Sofia put mehendi on my hand. I gave everybody aprons, there was a gift in it. Hafsa - Hiba's friend, also gave us gifts. "- Hibatullah
(The older boys were out all day, ABAP at his class, QBAP, IBAP and MBAP were first at Arabic class and then stayed at Abbi's office where they spent time with Uzair (also hanging there while his mom and sisters attended the party) and had lunch there, till it was time to leave for Quran/Arabic class with HBAP.)
Posted by Umm_baps at 10:07 AM