The children and their Ummi have enjoyed some arts and activities over the last year, which we have not had blogged about, but since we really enjoyed them we thought we'd share the pics here now:

The kids enjoyed making all kinds of designs with the fusion beads given by Didi Phopu. Masha'Allah all of the kids gave it a try including the elder BAPs, even SBAP (3yrs) managed to patiently put a small thing together (the little rectangle in the pic). The mostly pink heart is a sample of HBAP's (5 yrs) work (she eventually ran out of pink beads and the patience, since SBAP broke her work 3 times while she was still putting it together, Masha'Allah she did persevere till it was complete but the hunt for pink had to be compromised) 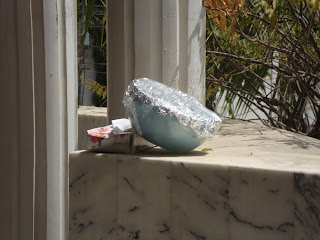 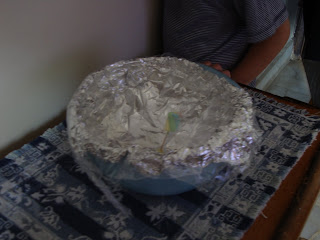 Origami balls were fun to try once, but did not kick off as a skill to be practiced because tennis balls are a lot more fun to play with and not as much effort to get :(
﻿
The yellow eggs are called "naked eggs" because there outer shell has been dissolved. There were immersed in vinegar and refrigerated.  The vinegar caused the carbon of the shells to be released, creating bubbles and white foam. After changing the vinegar over three days the shells dissolved leaving the egg membrane intact, and the egg yolk could be viewed through it, Masha'Allah. You can view a partially dissolved shell on the egg upfront between the regular eggs and golden ones.﻿ 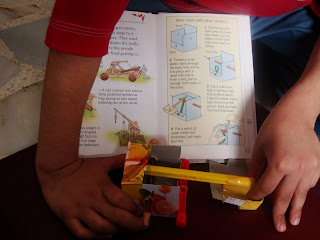 MBAP (aged 7) built a catapult following instructions from a book.
﻿ ﻿﻿﻿
﻿﻿﻿The above loom was purchased from the airport at Saudi Arabia, on our way home. Alhumdulillah the children enjoyed making little pot holders and marvelled at how long it takes to make such a small piece of clothe by hand.