Ramadan is a special for us all, and as our numbers have increased and the children aged, our Ramadan structure has changed according. This Ramadan all four of the elder Pirani boys fasted, but due to changes in the weather, not all could fast through out the month.Alhumdulillah Shawwal gave the elder two the opportunity to complete the Ramadan fasts and Alhumdulillah all three older boys were able to keep the six of Shawwal. This year even little HBAP (6 yrs) fasted a full day Masha'Allah. 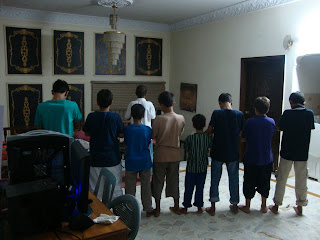 On ABAP's suggestion, we held a Qayyam gathering, on the 27th night, for seven of the boy's friends. They arrived before Iftar (spring rolls and custard), followed by  a pizza dinner and later Isha at the nearby Masjid. Masha'Allah all the boys helped clear up after meals. The rest of the night was spent in prayer (the boys taking turns to lead their friend's jamaat), chill time, playing cricket, watching a documentary about Muslim Inventions and trying out their friends' 'chara' guns.

After a suhoor of left over pizza, cereal and keema, the boys finally went to sleep after praying Salaat Fajr. Alhumdulillah it went well and all the kids enjoyed themselves, even SBAP (3 yrs) delved into the fun whereas ZBAP (1yr) wtched cautiously from the side lines. Insha'Allah we look forward to hosting a Qayyam night for the boys next year as well..