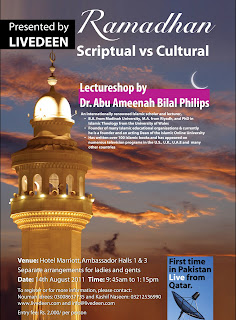 'What is a lectureshop?' is the question most people ask. Basically, a lectureshop is a workshop where there is more lecture and less work. In the one that I went to, the lecture was given by Dr. Abu Ameena Bilal Philips, on the topic of 'Ramadan: Scriptural -vs-Cultural'.

The whole event started at 9:45 am with the qirat of Surah Qadr by Osama Furqaan, followed with English translation by Abdullah Bin Azeem Pirani. Then Mr. Sharukh Hussain came up and started off by asking the similarity between a glass and a human being. The answer being that they both have to be filled, one with liquid, and one with knowledge. He then did a small activity in which everyone took a POST IT and wrote the reason they were here and then "posted it" on one of three sheets stuck to the walls around the room. He got one or two pretty sarcastic answers like "why are you here" or just "??" (literally someone wrote that!), although most people wrote " to gain knowledge". Some wrote "my mother/wife told me to/ is here", some "to see what Bilal Philips has to say" etc. Next he gave each table one long sheet of paper. Every table then had to choose a "writer". Mr Sharukh then asked a couple of questions from which the "writer" would then have to ask the rest of the table their answers and write them down. the questions were like: What does Islam mean to you?, What does the word Ramadan mean to you? etc. the answers were written and the sheets put up on the wall. Mr Sharukh took a round and read some of them out. The the main lecture by Abu Ameena Bilal Philips on Ramadan Scriptural vs Cultural started. Here are the main points of the lecture and Q&A session together:
After this he was asked to give us a briefing on The Islamic Online University which he did. He then signed off, and then we (audience) were all given a feedback form, and a paper on which we had to write a letter to ourselves on what we will achive this Ramadhan.This finished we went for Zuhr in the masjid downstairs.
Alhamdulillah, from this session I learnt a lot about the mistakes most of the people in our society make. I hope that later Insha Allah they have another session like this.
Posted by Umm_baps at 4:05 AM