Sometimes, the Piranis enjoy the opportuity to host the Book Worm Book Club, the following is about one of those opportunities: 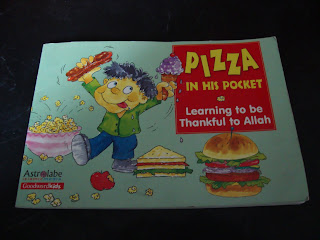 This week the BookWorm Club gathered at The Piranis’ home, Alhumudlillah. The club members
all sat in a circle in the balcony so they could enjoy the wind and sunlight outdoors. IBAP read the book “Pizza In His Pocket’ to his friends; which was a story about a little boy who loved to
eat food from different places around the world, but never thanked Allah (SWT) for the food. Then one day he met a girl who hadn’t eaten anything in a long time and was holding her tummy in pain. The boy felt ashamed about his own greediness and bought some food for the girl and her family and they all thanked Allah (SWT) for it. The book advises us to eat all the food our parents give us, including vegetables, without a fuss and share our food too and reminds us that, “Being thankful is what’s really great, eat the veggies on your plate and don’t be like the boy, who ate and ate and ATE!” 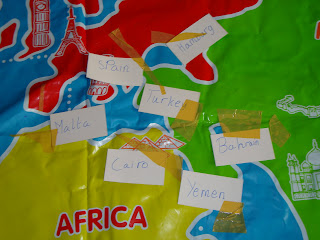 After the story,
the club members had a short discussion on eating etiquettes in Islam: to start
with Bismillah, use your right hand when eating and which Dua to say once done.
Then we moved on
to the activity. The members divided themselves into three groups, each group
was given an Atlas and a mother sat with them to help them use it. A large
Globe Trotter Twister mat was laid out.
Ummibaps called out the name of the countries and cities the boy in the
book visited, and the groups raced each other to locate it in their atlas. The
group who found the country/city would then send one of their members to stick
the place’s name card in the correct place on the Globe Trotters mat. 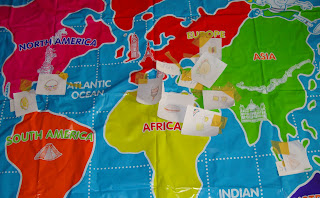 Once all the places were located, the second part of the activity began. The Ummibaps and
Qasim then called out the names of the different dishes the boy in the book had
enjoyed. The members had to remember which country/city the boy had received
the meal from and then take turns to stick the picture of the meal onto the
correct place’s namecard.

Alhumdulillah, it was fun, and we discovered places we had never heard of on the map and we also realized that not all atlas have the same cities marked on their “political world map” pages Subhan’Allah!