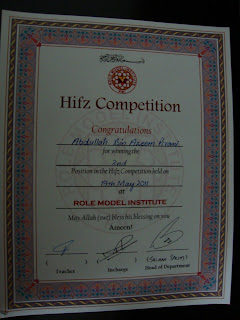 This is the SMS we recieved from ABAP's Hifz Class:

May Allah keep them steadfast on His deen.
Aameen."

Alhumdulillah we are vey grateful to Allah SWT that He has blessed us in this way. ABAP has completed 6 juz now Alhumdulillah. The Competetion consisted of 2 rounds. In the first round, each child  was tested and 2 students were chosen from each of the three study circles, these children were tested again in the second round and the top three children were then selected as winners. In the test each child was called up on stage and first asked to recite some small surahs and then the Qari would recite an Ayah and ask the child to continue reciting from thereon.

ABAP's prize was a gift voucher to Snack Attack, which he felt was ironic because we aren't strangers to the eatery. (First prize : bicycle, Third prize : a cricket bat) 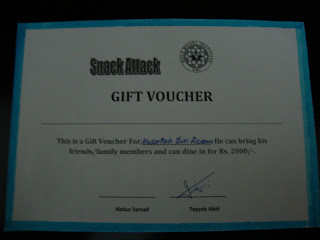 Masha'Allah the following is how we availed the voucher: 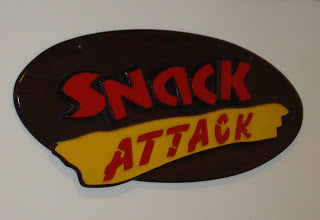 Subhan'Allah our bill was still within the voucher's stated amount (Rs 2,000), so being the Gujratis that we are we ordered two soft drinks to cover it!