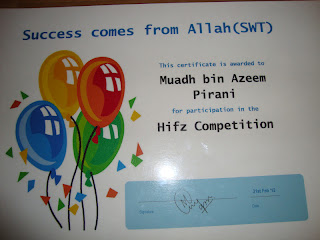 Marium Appa organized a Hifz competition for the four groups who are doing Hifz in her class; this includes HBAP (6yrs) and MBAP's (8yrs) group. The judges were three respected teacher's who run their own Quran classes. each student was called up in turn and the judges would recite an ayah following which the student had to compete the quoted surah. Medals were awarded to the first and second best reciters.

Alhumdulillah, HBAP received the silver medal in her group. Masha'Allah she recited in a strong loud and clear voice. MBAP's group had stiff competition and he too recited easily and without hesitation. Alhumudulillah he though disappointed he was not upset for not having won. 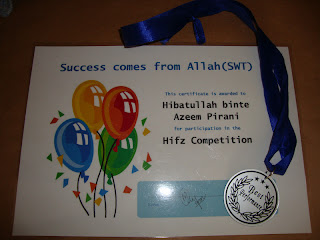 More about the competition from our 4 yr old correspondent SBAP:

" I was sitting in the class and I had two toffee: ZBAP and mine. And I was sitting and everyone got gifts not me.
They (the students) were sitting and they were talking and Marium Appa said to be quiet but they were not being quiet. They all got papers (certificates) and wearing things that you wear (medals). Ant they got toffees.
They had tables and chairs (for the judges) and mats (for participants and audience) and everyone was sitting on them. There were papers and balloons and paper flowers with butterflies (decorating the walls.)